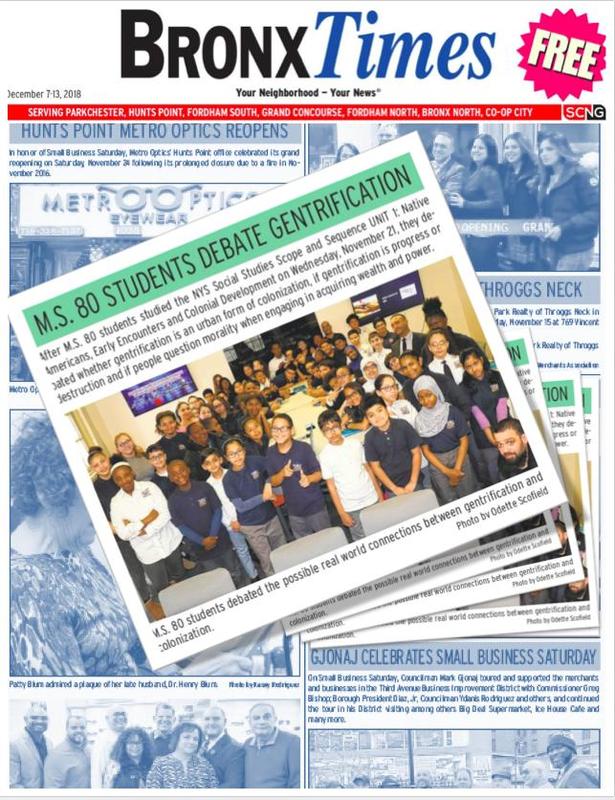 M.S.80 students came together for a fiery debate on gentrification and urban colonization. Click to read more.
Students across multiple classes, and different grades participated in a formal debate to discuss the pros and cons of gentrification, and whether or not it's considered a form of urban colonization. This debate allowed students to make real world associations to what they've been learning in Social Studies, and make applicable connections to the changes they see happening around their own communities.
The debate comprised of two teams of 6th grade students (Pro 80 Hawks vs. 80 Defenders of Peace), with a a class of 7th graders serving as debate judges.  Joining as observers were various teachers, staff and parents. The debate questions were, "Is gentrification progress or destruction?" and "Is gentrification an urban form of colonization?"
Both teams had a group of students called "Think Tanks," whose responsibility was to take digital notes, do live research, fact check and create questions for the debaters to utilize in their arguments. While the debate was underway, the judges in attendance were commenting, live blogging and creating their own questions through use of google tools on laptops.  The entire debate was a great practice on the skill of citing evidence, as every argument presented, had to be backed by solid evidence and not just opinion. (CCSS: RI6.1, W1a,b)
View recap video Here